Generally when I see a decline in my HRV trend it is because of illness, high stress or significant accumulation of fatigue. However, over the Christmas break I decided to take 2 weeks off from lifting. This decision was based mostly on the fact that I wouldn’t have access to my training facility until after the break. The last time I remember taking this much time off from lifting was back in 2006 when my appendix ruptured and I didn’t get to a hospital until about a 10 days later. I have a nice 6 inch scar on my lower right abdomen to remind me to go see a doctor sooner than later when I feel really sick. Needless to say I was forced to take some time off.

Below are some screen shots of my data that clearly show a steady decline in my HRV trend after approximately one week of training cessation. 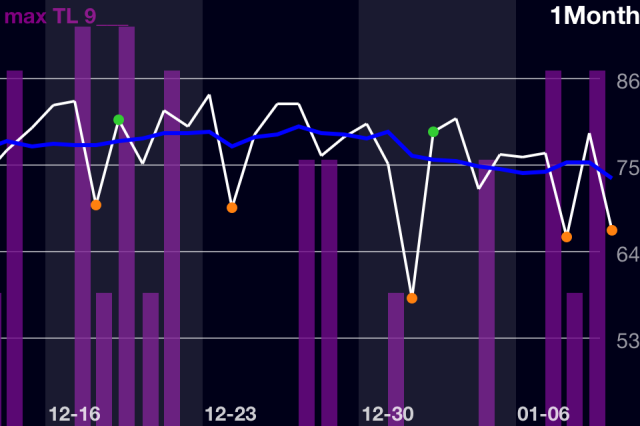 –          Above you can see that my last workout before the break was on 12/21 and my first workout back was this Monday (01/07). Between those dates I performed 4 body weight workouts that were largely half-assed. I think my rationale for them was to justify eating all of those high calories meals over the holidays. Without these mini workouts I believe the trend would’ve shown a steeper decline.  HRV baseline dropped from about 80 to about 74 by the end of the detraining period.

–          The steepest dip in the trend came on New Year’s Day as a result of the overeating and drinking from New Year’s Eve. HRV responds poorly to partying.

–          Training resumed 01/07 and as expected strength levels were noticeably down and a workout that previously could be considered a deload was rated as an 8 and caused a pronounced dip in HRV the following day accompanied with extreme soreness. A clear sign that I’ve detrained. The same happened for Wedneday’s workout (01/09). 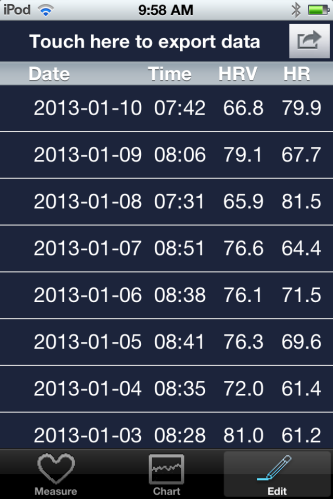 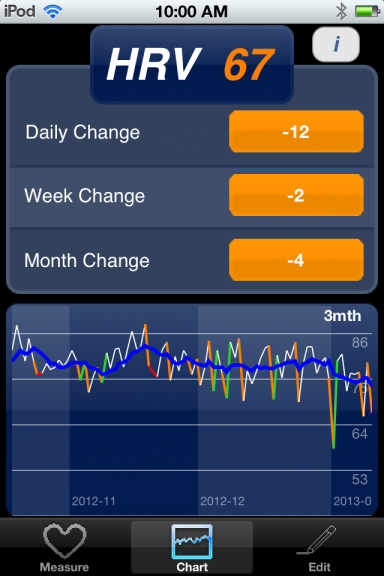 –          Above you can see my 3 month trend charted and my Daily, Week and Month change. You can clearly see my baseline HRV steadily decline in late December.

I can think of 2 stuides that investigated the effects of detraining on HRV.

In a study by Gamelin et al (2007), healthy young men (untrained, age 21) were put through 12 weeks of aerobic training followed by 8 weeks of detraining to determine its effect on HRV. An improvement in HRV was seen after the 12 weeks however HRV scores returned to pre-test levels after only 2 weeks of training cessation. “Twelve weeks of aerobic training are sufficient to achieve substantial changes in Heart Rate Variability; and only two weeks of detraining completely reverse these adaptations.”

–          My declining trend in HRV was reflecting my fitness levels, not my strength levels even though they also declined. My trend would’ve likely remained relatively unchanged had I maintained aerobic fitness.

In a recent study by Gutin et al. (2012), obese children were put through a 4 month exercise intervention. RMSSD (a time domain measure of parasympathetic tone) increased after the exercise period and decreased during the detraining period. Below are some excerpts from the study I felt were worth sharing;

“The variables that were significantly associated with individual differences in responsivity to the PT were: (1) the pre-PT RMSSD level—higher pre-PT values were associated with lower change scores (r= −0.28, p = 0.018);”

“The primary result of this study was that the RMSSD increased during 4-month periods during which the obese children were engaged in PT, and declined in the 4-month period following cessation of PT in Group 1. This demonstration of what occurred as a result of increases and decreases in controlled vigorous activity supports the idea that regular exercise has a favorable influence on PSA in this population. “

–          These results obviously aren’t shocking and we don’t need HRV to tell us we are detrained. However, monitoring the trends allows us to ensure favorable responses to training. This becomes much more important in athletes or individuals engaging in intense physical training.

Only two weeks of training cessation will result in noticeable decrements in performance and a decrease in resting parasympathetic tone. In the future I will likely perform 1-2 maintenance type workouts each week to maintain strength and fitness levels.