We quantified associations between changes in heart rate variability (HRV), neuromuscular and perceptual recovery following intense resistance training (RT). Adult males (n = 10) with >1 year RT experience performed six sets to failure with 90% of 10 repetition maximum in the squat, bench press, and pull-down. Changes (∆) from pre- to immediately (IP), 24 and 48 h post-RT were calculated for neuromuscular performance markers (counter-movement jump peak power and mean concentric bench press and squat velocity with load corresponding to 1.0 m∙s−1) and perceived recovery and soreness scales. Post-waking natural logarithm of the root-mean square of successive differences (LnRMSSD) in supine and standing positions were recorded pre-RT (5 day baseline), IP and two mornings post-RT. All parameters worsened at IP (p < 0.05). LnRMSSD measures were not different from baseline by 24 h. Neuromuscular markers were not different from pre-RT by 48 h. Perceptual measures remained suppressed at 48 h. No significant associations among ∆ variables were observed (p = 0.052–0.978). These data show varying timeframes of recovery for HRV, neuromuscular and perceptual markers at the group and individual level. Thus, post-RT recovery testing should be specific and the status of one metric should not be used to infer that of another. 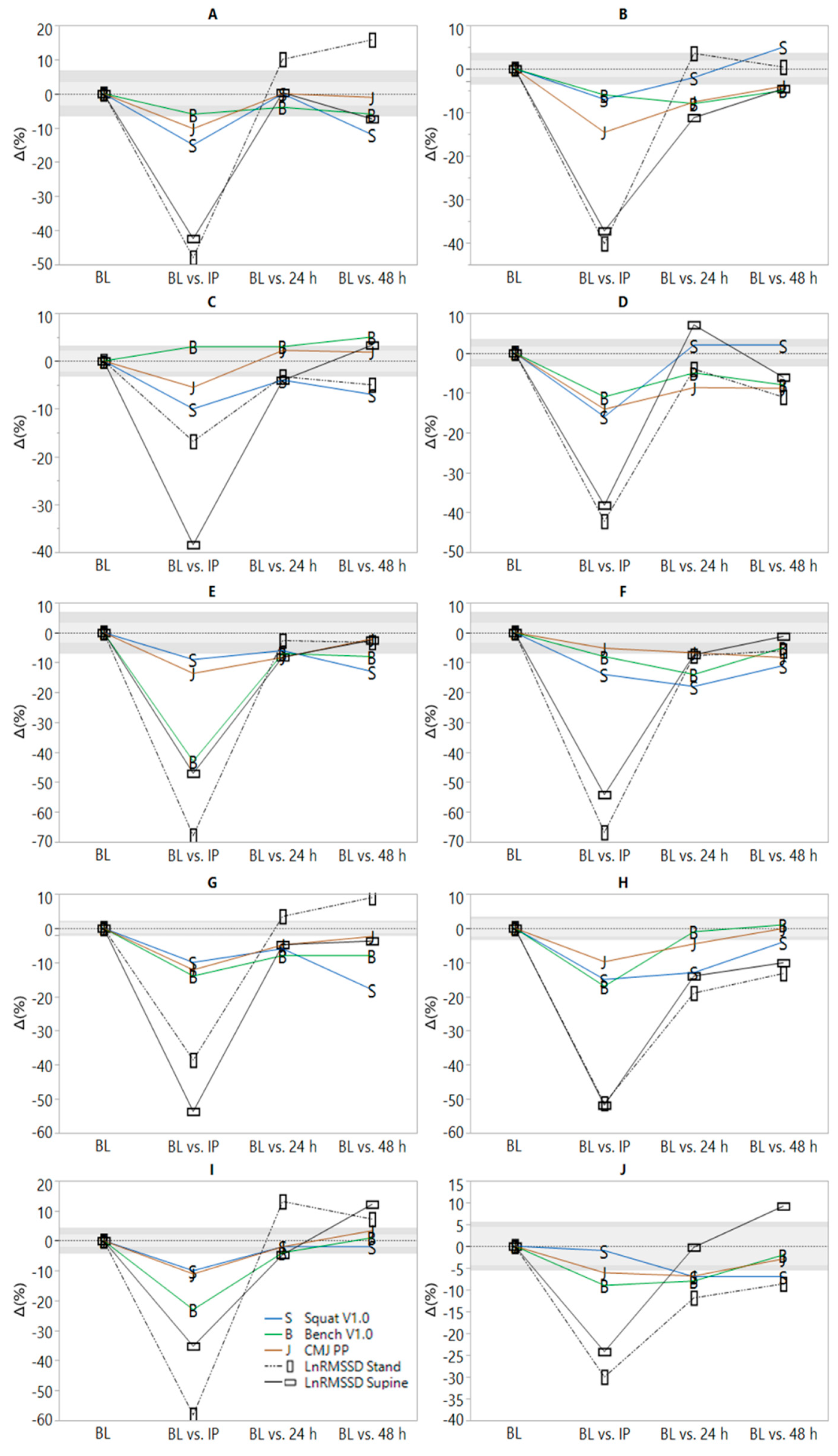 Thanks to Christoph Schneider for inviting my collaboration on this new study from his PhD work. The full-text can be viewed here.

Methods: In the study, 37 well-trained athletes (ST: 7 female, 12 male; HIIT: 9 female, 9 male) were subjected to orthostatic tests (HR and HRV recordings) each day during a 4-day baseline period, a 6-day overload microcycle, and a 4-day recovery period. Discipline-specific performance was assessed before and 1 and 4 days after training.

Results: Following ST overload, supine HR, and vagal HRV (Ln RMSSD) were clearly increased and decreased (small effects), respectively, and the standing recordings remained unchanged. In contrast, HIIT overload resulted in decreased HR and increased Ln RMSSD in the standing position (small effects), whereas supine recordings remained unaltered. During the recovery period, these responses were reversed (ST: small effects, HIIT: trivial to small effects). The correlations between changes in HR, vagal HRV measures, and performance were weak or inconsistent. At the group and individual levels, moderate to strong negative correlations were found between HR and Ln RMSSD when analyzing changes between testing days (ST: supine and standing position, HIIT: standing position) and individual time series, respectively. Use of rolling 2–4-day averages enabled more precise estimation of mean changes with smaller confidence intervals compared to single-day values of HR or Ln RMSSD. However, the use of averaged values displayed unclear effects for evaluating associations between HR, vagal HRV measures, and performance changes, and have the potential to be detrimental for classification of individual short-term responses.

Conclusion: Measures of HR and Ln RMSSD during an orthostatic test could reveal different autonomic responses following ST or HIIT which may not be discovered by supine or standing measures alone. However, these autonomic changes were not consistently related to short-term changes in performance and the use of rolling averages may alter these relationships differently on group and individual level. 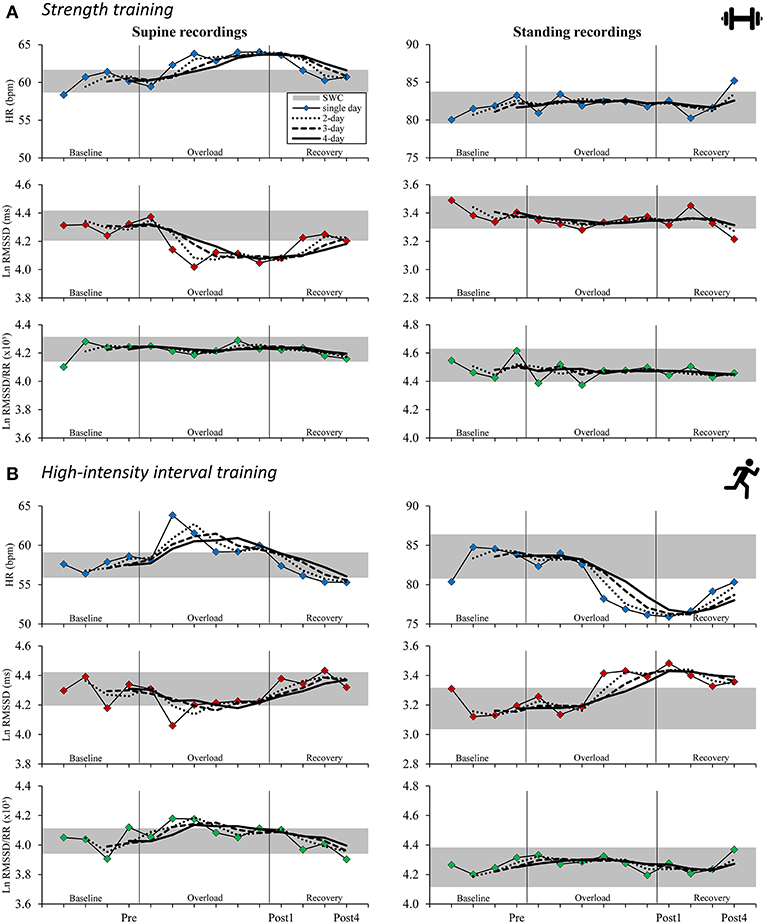 Our latest paper is a case report demonstrating substantial changes in HRV following concussion in a college football player. The full text can be accessed here. The main findings were:

1: The post-concussion HRV trend appeared similar to trends commonly associated with training fatigue. Therefore, staff should investigate the possibility of an unreported concussion when similar trends are observed in athletes.

4. The convenient methodology used to monitor HRV (60-second finger-pulse plethysmography on a mobile application) can feasibly be implemented with an entire roster of athletes.

This case report demonstrates the effects of sport-related concussion (SRC) on heart rate variability (HRV) in an American college football player. Daily measures of resting, ultra-short natural logarithm of the root mean square of successive differences (LnRMSSD), subjective wellbeing, and Player Load were obtained each training day throughout a 4-week spring camp and 4 weeks of preseason training. SRC occurred within the first 2 weeks of the preseason. During spring camp and preseason pre-SRC, the athlete demonstrated minimal day-to-day fluctuations in LnRMSSD, which increased post-SRC (LnRMSSD coefficient of variation pre-SRC ≤ 3.1%, post-SRC = 5.8%). Moderate decrements in daily-averaged LnRMSSD were observed post-SRC relative to pre-SRC (Effect Size ± 90% Confidence Interval = −1.12 ± 0.80), and the 7-day rolling average fell below the smallest worthwhile change for the remainder of the preseason. LnRMSSD responses to SRC appeared similar to trends associated with stress and training fatigue. Therefore, performance and sports medicine staff should maintain regular communication regarding player injury and fatigue status so that HRV can be interpreted in the appropriate context. Detection and monitoring of autonomic dysregulation post-SRC may require near-daily assessment, as LnRMSSD showed greater daily fluctuations rather than chronic suppression following the head injury. 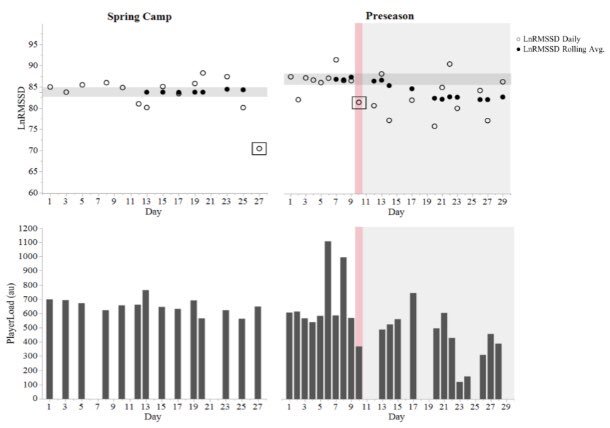 Thanks to Dr. Marc Bubbs for having me on the show to discuss HRV in team sports. Details and episode links below.

In Season 3, Episode 7 Dr. Bubbs interviews Dr. Andrew Flatt PhD to discuss applications of heart rate variability (HRV) monitoring in team sport athletes. Dr. Flatt reviews the basic physiology of HRV, how pre-season testing can inform your training and recovery plans, how in-season monitoring influences decision making, and new findings on HRV results in larger athletes, such as linemen in American football. Dr. Flatt also discusses how the “other 22-hours” in the day – sleep, long-haul travel, mental and emotional stress, etc. – impact the nervous system and HRV measures, and finally provides some practical tips on how to collect HRV measurements, validated apps, and red flags to avoid when interpreting results.

Summary of This Episode

7:45 – What impacts HRV scores in athletes

46:30 – Different “apps” to implement with clients

57:00 – Evolution of research in HRV and team sports

Here’s a recent case study featuring HRV changes in a pro soccer player throughout preseason training. Thanks to my colleague Alirezza Rabbani for inviting my collaboration on this one.

The main findings were that post-waking HRV and the HR-Running Speed Index (an indicator of aerobic fitness) during the warm-up jog progressively improved and were highly correlated. Additionally, we found that 1-min HRV measures were no different than 5-min HRV measures. The paper is free open-access at the link below.

Posted on December 9, 2018 by hrvtraining

A quick summary of our latest paper follows the abstract below…

Rugby seven players often compete in 2-day tournaments over consecutive weekends, leaving only 5 days to recover and prepare for the next tournament. Many tournaments are held internationally, adding substantial travel demands to the already-taxing nature of the sport. We hypothesized that the added stress of travel for an international tournament may result in greater decrements in HRV relative to a local tournament.

The main findings were that despite no significant difference in match-physical demands (high speed running, total distance and sRPE), significant reductions in LnRMSSD were observed only in response to the international tournament (see figure below). Despite non-significant p values at other time-points, individual analysis showed that ~80% of the players showed meaningful reductions in LnRMSSD relative to baseline following the local tournament and on the day of travel (see bottom of figure). Thus, it seems that HRV was still affected by these events, though to a lesser magnitude than the international tournament.

The decrements in LnRMSSD at the international tournament were preceded by significant decrements in perceived sleep quality and energy levels reported on or after a chaotic travel day. The travel day involved an earlier than usual wake-time and a missed flight connection. This forced the team to complete the travel by bus, delaying their hotel arrival to 3 am.

Given that HRV is sensitive to a variety of physiological, psychological and environmental factors, we cannot say for certain that travel stress accounted for the differences in HRV responses, though it seems likely. We state: “LnRMSSD responses to the international tournament were therefore likely influenced by a combination of variables associated with, but not limited to altered sleep, a disrupted travel itinerary and the process of relocation which interacted with the physical and psychological stress associated with tournament-play.”

Differences in collision/body contact loads between tournaments may have contributed to differences in LnRMSSD responses, but were not assessed. Additionally, this was the first pair of consecutive tournaments for this team in at least six weeks, which may have served as a relatively novel stimulus. Therefore, we’re not sure if similar LnRMSSD responses would be observed when the team was re-familiarized with consecutive tournaments or when travel isn’t so hectic.

Our latest study investigates the relationship between subjective indicators of recovery status and HRV among NCAA Division 1 sprint-swimmers. The main findings were:

We report both group and individual relationships. The full text is available here.

Heart rate variability (HRV) is a physiological marker of training adaptation among athletes. However, HRV interpretation is challenging when assessed in isolation due to its sensitivity to various training and non-training-related factors. The purpose of this study was to determine the association between athlete-self report measures of recovery (ASRM) and HRV throughout a preparatory training period. Ultra-short natural logarithm of the root mean square of successive differences (LnRMSSD) and subjective ratings of sleep quality, fatigue, muscle soreness, stress and mood were acquired daily for 4 weeks among Division-1 sprint-swimmers (n = 17 males). ASRM were converted to z-scores and classified as average (z-score −0.5–0.5), better than average (z-score > 0.5) or worse than average (z-score < −0.5). Linear mixed models were used to evaluate differences in LnRMSSD based on ASRM classifications. LnRMSSD was higher (p < 0.05) when perceived sleep quality, fatigue, stress and mood were better than average versus worse than average. Within-subject correlations revealed that 15 of 17 subjects demonstrated at least one relationship (p < 0.05) between LnRMSSD and ASRM variables. Changes in HRV may be the result of non-training related factors and thus practitioners are encouraged to include subjective measures to facilitate targeted interventions to support training adaptations.