Here is some more data and analysis from a nationally ranked high school sprinter (Junior) that I have using ithlete. Please note that the sprinter trains primarily with his sprint coach. I work with him roughly 3 days/week on mobility, restoration, etc.  He was an ideal candidate for monitoring HRV as he is an extremely motivated and dedicated athlete and there was no doubt in my mind that he could handle the daily measurements. The data stops in early January because he somehow broke the HRV receiver I gave him. A new one has been ordered recently I’ve been told. This data collection is primarily for observational purposes since I do not control or manipulate his training as mentioned above. 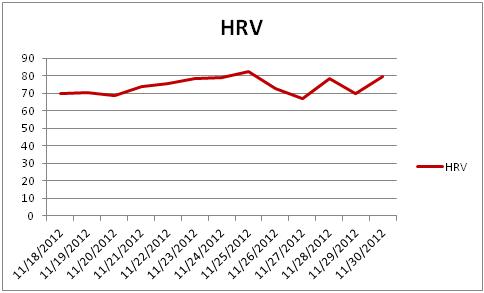 First Half of December

Given that this athlete is still young and taking advantage of “newbie” strength gains, I would expect him to hit PB’s relatively consistently on the track. Based on his trend, fatigue was never really an issue. More training may have been well tolerated.

I’d like to get him to start using the training load feature too now to get a better idea of how hard his workouts are (perceptively).

2 thoughts on “HRV Data from a High School Sprinter”